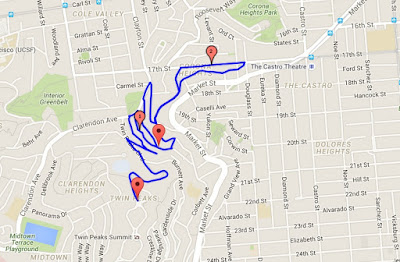 Whoo! We were in San Francisco this past weekend and I got some walking in.  First stop on what was a GORGEOUS Friday afternoon was the north side of Twin Peaks which spills down into what Google Maps calls Corona Heights.  I've never heard anyone use that name to describe the area, so not sure if it's an actual thing or not. So for this walk, I'm calling the area just 'Twin Peaks.' 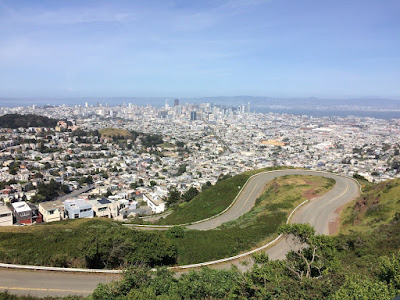 SHOCKING NEWS: The view from Twin Peaks is breathtaking.  On a clear day, you can see all of downtown, the Bay, and even the East Bay in one go.  So effing amazing. Keep this info on the DL or it will become a tourist destination.

What isn't amazing? The lack of sidewalks or safe walking space on this road down the side of Twin Peaks.  It's a little sketchy walking on the edge of a driving lane on a road that is loaded with blind corners. 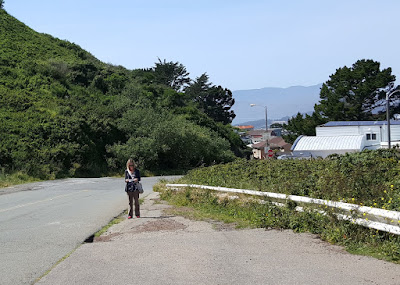 Our solution: My husband drove slowly in our car behind me as I walked down the most dangerous part of the slope.  It worked. I survived. 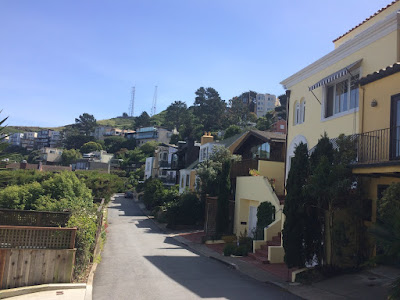 Once we got down to the houses, my husband parked and walked with me the rest of the route.  The neighborhood is a cluster of tightly packed homes perched on the side of the hill.  There isn't much in the way of yards for these very nice houses, but there's something better than lawns up here: 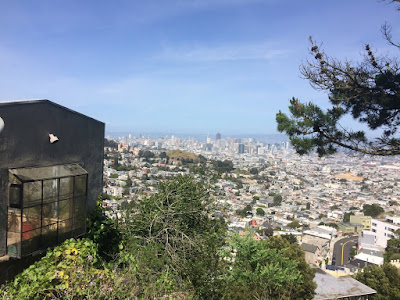 Most houses up here have insane views of the entire city from their back windows.  Totally worth the lack of sod. Take a minute to imagine eating breakfast in front of that window right there.  Yeah, that's nice.

Also notable up on Twin Peaks are the birds. We are living in LA now, where we haven't heard a bird chirp in months, so maybe this is the standard level of chirp action around the entire city of SF.  But it just seemed so loud up on Twin Peaks that I felt compelled to get some video.  Enjoy. 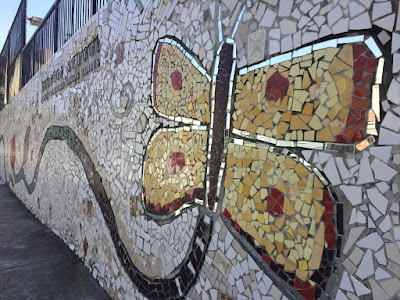 Smack in the middle of this hood is the mosaic-covered Rooftop Elementary School.  The school building is surrounded by walls completely covered in tile work.  It's really beautiful and worth a walk around the block just to admire the craftsmanship.

The route I took was mostly downhill which made this a really doable walk. I don't recommend walking above the house line because of that whole no sidewalks issue.  But the neighborhood itself, with the views and the birds, is very lovely to walk.  I would not say this neighborhood is very stroller-friendly, though, as the sidewalks are narrow and start and stop around the curves of the narrow streets.
Labels: Great Views Residential Skyline Twin Peaks
Location: Twin Peaks, San Francisco, CA, USA